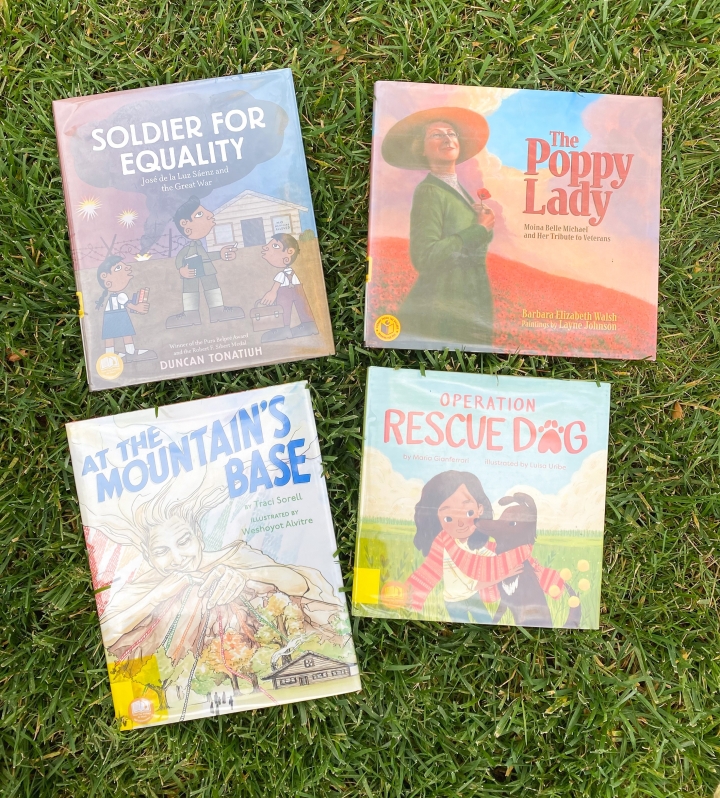 In the United States, Veterans Day falls on November 11 every year. Veterans Day serves as a reminder to Americans to take the time to honor our military veterans, those who have fought to protect our country and the lives of others around the world. We dedicate November 11 to all of our veterans in remembrance of the anniversary of the end of World War I. While our girls don’t understand World War I, and quite frankly, don’t understand much about wars and our military in general, they have this holiday off of school every year, and I’d like for them to start to understand why. So…

Of course, we’re going to read some books about it! I have my eye on a few more books about veterans and Veterans Day, but I’m having trouble getting my hands on them right now… In the meantime, I’ve got four terrific titles to share with you, with hopefully more inspirational and informational reads to follow.

Books that Celebrate Our Veterans

*** Affiliate links used. As an affiliate I earn from qualifying purchases. Thank you for considering making a purchase through my links! To read my full disclosure CLICK HERE. Most age ranges listed are publishers’ recommendations. Always remember that you know your child best.

The Wall by Eve Bunting, illustrated by Ronald Himler — I dare you to read this one and not tear up. It’s just that touching. A small boy and his father are making their first pilgrimage to the Vietman Veterans Memorial, with the end goal of finding the boy’s grandfather’s name. We stand with them as they search, but we also get to see other visitors come, too, from school classes to disabled veterans. War, no matter which war, has a lasting impact, and this beautifully touching book is a great way to start conversations about that impact with children. Ages 4-7, but a great introduction to veterans, Veterans Day, memorials, and/or the Vietnam War for older kids, too.

At the Mountain’s Base by Traci Sorell, illustrated by Weshoyot Alvitre — Loosely based on the life of Ola Mildred Rexroat, the only Native American female pilot to fly in World War II, Sorell gives us a short but tender story of a family separated by war, waiting for their pilot to return. Sorell gives us insight into the life of this Cherokee family, as they work to keep on while the pilot flies. This one might make you tear up and is perfect not only for Veterans Day as well as Native American Heritage Month. Ages 4-8.

Operation Rescue Dog by Maria Gianferrari, illustrated by Luisa Uribe — Okay, so this is mostly about rescue dogs, but the main character, Alma, gets a rescue dog while her mother is serving in Iraq. Alma waits for months between phone calls with her mom and exchanges sporadic letters, so her Abuela suggests a rescue dog “the color of Mami’s eyes” to keep the company and be a surprise friend for Mami when she gets back. Told in alternating story between Alma and Lulu, the dog, this one will warm your heart and start important conversations about families who miss military members. Ages 4-8.

Soldier for Equality: José de la Luz Sáenz and the Great War by Duncan Tonatiuh — Though José de la Luz Sáenz (Luz) family immigrated from Mexico years before he was born, he was born in Texas and was American… But wasn’t treated like many other Americans simply because his family came from Mexico. Wanting to change things for future generations of Mexican Americans, Luz worked hard in school and became a teacher. And when the United States entered World War I, he volunteered to serve in the United States Army, believing it was his duty to serve his country… Even though people in his country didn’t always treat him with respect. “He wanted to demonstrate that Mexican Americans loved America and would give their lives fighting for it.” The rest of the story tells of Luz’s time serving in the Army, of the diverse group of friends he made there, of the hard times he had in his regiment, and of how he was able to use his Spanish to translate important information about the war. But more than all of that, Luz fought for the rights of Mexican Americans once he returned from the war, joining forces with many veteran friends he made to effect change in America, too. Tonatiuh includes extensive backmatter about Luz, Latinx solders and their fight for equality, World War I, and the League of United Latin American Citizens. Ages 6-8, but this one is long. I’d go older here, or split it into multiple readings.

The Poppy Lady: Moina Belle Michael and Her Tribute to Veterans by Barbara Elizabeth Walsh, illustrated by Layne Johnson — Ooh, this one is absolutely fascinating! Have you ever wondered why we use poppies to show remembrance for fallen soldiers? It’s all due to Moina Belle Michael, a woman who desperately wanted to find a way to help the war efforts during World War I. You’re definitely going to want to read the Author’s Note here, as Walsh has a special connection to Michael and her poppies. Ages 7-10.