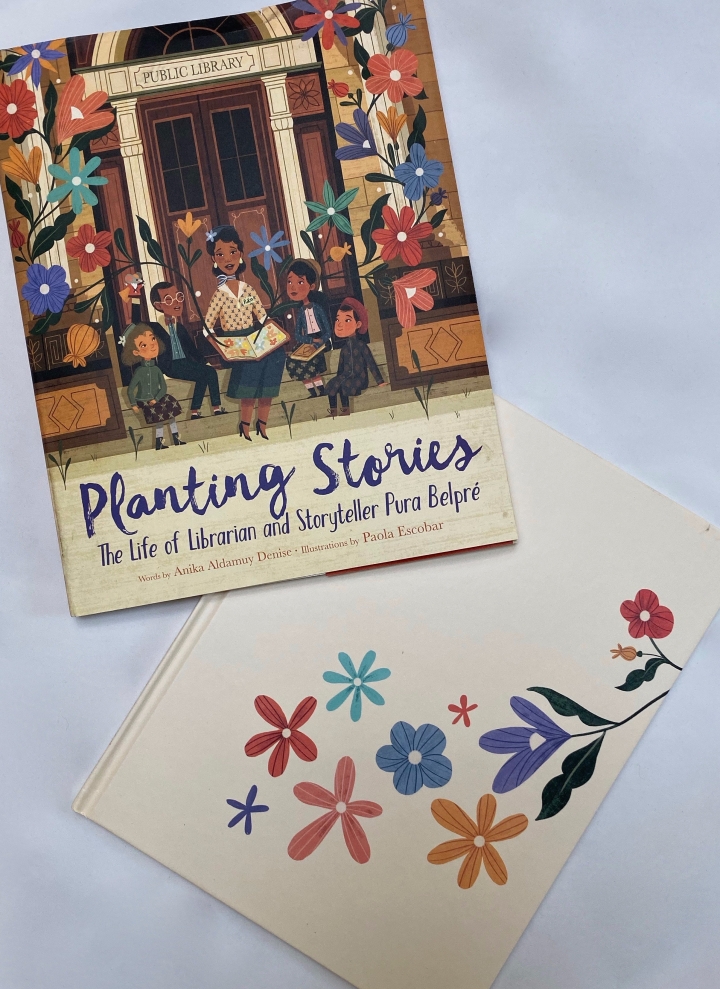 When I was a teacher, helping my students understand the beautiful diversity of our country, as well as the long journey and many changes already behind us (and more still to come…) was hugely important to me. In my last classroom, we spent most of the second half of the year digging deep into the lives of Americans who fought for change, for equality, for better lives. We learned about Blacks, Hispanic, Asian-Americans, and immigrants. We learned about women, children, persons with disabilities, indigenous peoples, and more. We learned about so many people who worked so hard so that future generations could have better lives.

And, now as a parent, I try to continue that work in my own house, finding age-appropriate ways to teach our girls about the diversity around us, where our country has been, and where they might help our country go. Planting Stories: The Life of Librarian and Storyteller Pura Belpré by Anika Aldamuy Denise and illustrated by Paola Escobar is a perfect read for this endeavor! 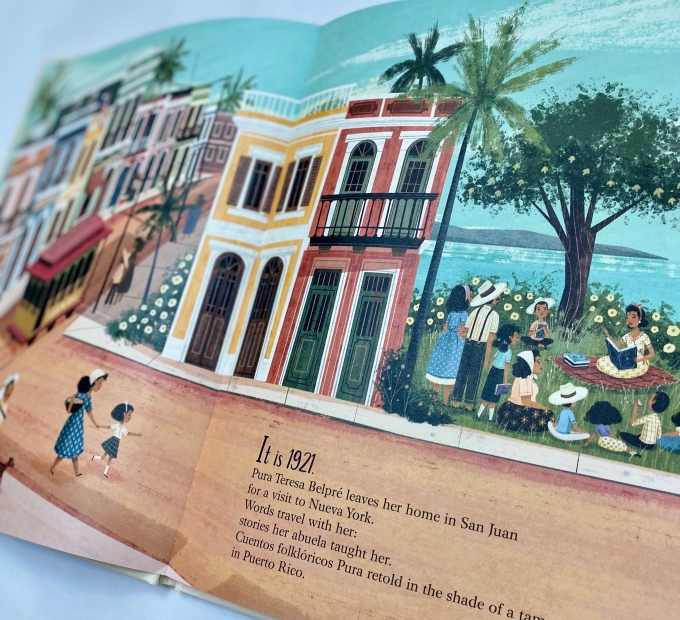 This story of Pura Belpré, the first Puerto Rican librarian in New York City, begins when Belpré left Puerto Rico to visit New York in 1921. One of the first things that struck me was that Belpré was hired by the New York City Public Library because they needed a bilingual assistant! I wouldn’t have guessed that was on anyone’s radar almost 100 years ago, but how lucky for the children of New York City then, and for children around the world now, that Belpré landed that job! We learn how Belpré began her library career as an oral storyteller, passing on the stories her grandmother taught her, telling them in both English and Spanish. We watch her make puppets by hand, to bring her stories even more alive to her audiences. And we see her determination to get these stories in writing, in Spanish, for children to read instead of just hear. Belpré’s legacy lives today, not only through the stories that she told and published, but through the inspiration she gave to other Spanish-speaking immigrants as well as readers today (the Pura Belpré Award, given annually by the American Library Association, recognizes outstanding literature contributions celebrating the Latino cultural experience). 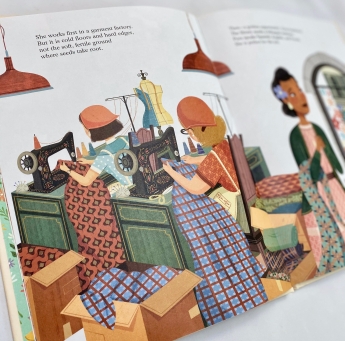 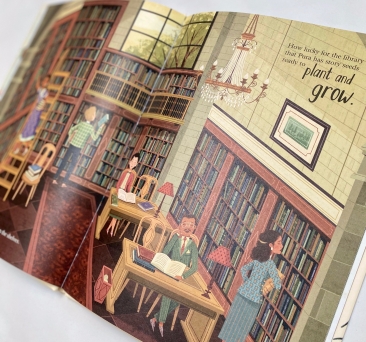 Our younger daughter is super interested in learning Spanish right now. We’re not totally sure where it’s come from, and though my husband speaks pretty fluent Spanish, I don’t… However, Denise also includes various words and phrases in Spanish throughout the book (unitalicized, which makes the transitions a little less jarring and awkward), always giving enough context so that even I can understand the meanings of these words. 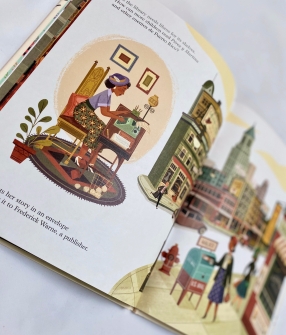 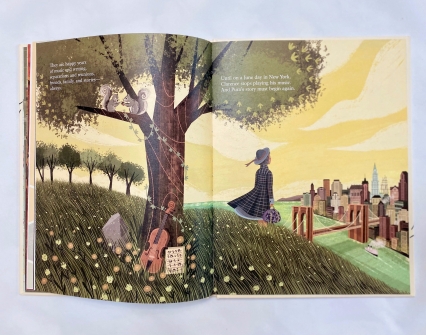 While thus far this review focuses on Belpré’s story, I can’t wrap it up without recognizing the beauty of Paola Escobar’s illustrations! These digitally rendered illustrations are warm, vibrant, and full of color, as I imagine Belpré was as well. They are full of action and detail (but not to the point of distraction), so you’re going to want to slow down and let your children take everything in. I now need to get my hands on more of her works! 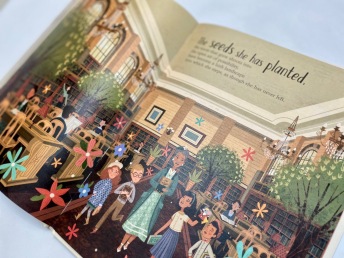 Denise also includes an Author’s Note with more in-depth details of Pura Belpré’s whole life, as well as bibliographical notes, suggestions for further reading, and summaries of Belpré’s stories mentioned in this book. You’re also going to want to check out the beautiful endpapers as well as the hidden gems under the dust cover! 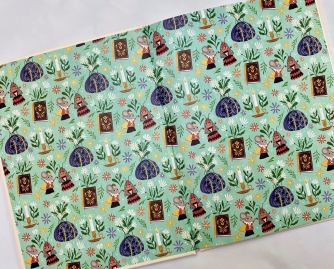 If you liked this, check out:

2 thoughts on “Planting Stories: The Life of Librarian and Storyteller Pura Belpré by Anika Aldamuy Denise”

Stick with me for this one...
Though I've had a growing booklist for Black History Month and have a few books about Martin Luther King, Jr. on that list, I had never made a list of books specifically about Martin Luther King, Jr. until a follower asked me for one. Fortunately for us all, many picture books have been written about Dr. King, but the flip side of that is that it can be hard to weed through them all and find the really engaging, interesting, and thoughtful Dr. King biographies for young children.
Fans of Frog and Toad, Elephant and Piggie, Leonardo and Sam, and so many more, rejoice! Elliott Kalan and Andrea Tsurumi (author/illustrator of one of my all-time favorites, Accident) have teamed up to bring us Sharko and Hippo… And I think you’re going to love them!
When we began talking about growth mindset as a family last year, we quickly realized we wanted a concrete way to bring the concept of growth and fixed mindsets to life for the girls. We decided that we'd each set a goal of something we wanted to learn in 2020 and check in with and encourage each other throughout the year as we worked towards those goals. That set-up brought us lots of success, so we decided to revisit it this year (albeit a little more loosely, dropping the "learn" and just making this a goal).
I need your help! If you follow my Instagram stories, you may have noticed that a few things changed for me this fall: first, I began work as a substitute teacher at our girls’ school, hoping to do my part to help make the year a *tiny* bit easier on the teachers and administrators and also help to keep school open for in-person learning a little longer, and then 2) that grew into a part-time job as a teacher’s aide at our wonderful school.
If you’ve been following along for a while, you might remember that last January, our family started a focused, intentional endeavor when we’d read about, talk about, and practice chosen traits that we wanted to foster and strengthen together. You might even remember how we started this Family Focus Trait practice in 2020… With growth mindset!
Loading Comments...
Comment
×
%d bloggers like this: